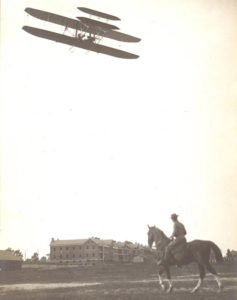 The first full-scale public performance of a Wright airplane in the U.S. occurred at Fort Myer in Arlington, Virginia in September of 1908. The U.S. War Department had offered Wilbur and Orville Wright a $25,000 contract if their Flyer reached a speed of 40 miles per hour in test flights. Wilbur and Orville had solicited the War Department to adopt their new Flyer as a practical machine that could deliver messages or scout from the air in war. With its proximity to Washington and home to the Army’s Signal Corps Aeronautical Division, Arlington’s Fort Myer was a logical place to test the Wright brothers’ heavier-than-air flying machine.

Fort Myer was the site of experiments in military aeronautics even before the Wright brothers. In 1899 the Army developed land below Fort Whipple, the predecessor of Fort Myer, to construct balloon barns. The Union Army had successfully used balloons in the Civil War for reconnaissance and meteorological functions. Fort Myer leadership experimented with rigid airships and even approved them for military use in late August 1908, but their poor maneuverability made them a short-lived piece of American military technology.[1] The Wright brothers’ aircraft proved a much more useful military technology tested at Fort Myer. 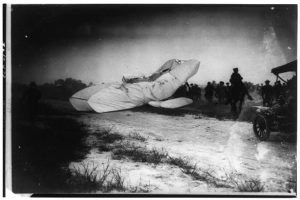 Although Wilbur was demonstrating one of the brothers’ flyers in France, the younger Orville took up the challenge.  The parade ground at Fort Myer, a large, flat, open space encircled with trees, was where Orville Wright flew their aircraft over a period of two weeks in early September. On September 9, Orville made a world record by remaining in the air for more than one hour, circling the parade ground 55 times while more than 1,000 government officials watched. Several days later a crowd of more than 5,000 people came to see the Wright Flyer soar. Fort Myer leadership appointed Lieutenant Thomas Selfridge, a rising aeronautical expert, to accompany Orville on a flight. On September 17, they took off in the early evening. After circling several times, a cracked propeller vibrated a stabilizing wire loose, incapacitating the rear rudders and sending the Flyer into a downward pitch. Although badly injured, Orville survived, but Lieutenant Selfridge became the first powered aircraft fatality in the world.[2] The incident was the first crash the brothers had experienced due to a mechanical failure, and certainly the most public.

Orville’s sister Katherine came to Washington to visit him in the hospital and encouraged him to persist with the test flights. Orville returned to Fort Myer and performed again for the Army from late June through July, 1909. On July 27 the brothers were awarded the contract, now increased to $30,000 and Orville flew for 1 hour and 12 minutes at an altitude of 150 feet, taking 79 passes around the parade ground. Three days later he passed a cross-country speed test by flying from Fort Myer to Alexandria, a distance of 10 miles, at 42-45 miles per hour.[3] The success of the Wright brothers at Fort Myer gave the Army the new aviation technology it desired and set the tone for the development of the airplane through World War One. 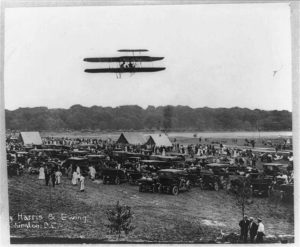 The Army used the Wright Flyer, which it called Signal Corps No. 1, to train pilots in 1909 and 1910 in College Park, Maryland and at Fort Sam Houston in San Antonio, Texas. Wilbur had returned from France to assist Orville with training Lieutenants Frederic Humphreys and Frank Lahm at College Park, the new headquarters for the Army’s Aeronautical Division. After moving flight training to the warmer climate of San Antonio, the Signal Corps appointed Lieutenant Benjamin Foulois as the sole person to train in the Wright brothers’ aircraft. The brothers did not join Foulois in Texas, but remained in close correspondence with him as he struggled to fly, fix, and fund the many repairs necessary to keep the plane in service. Foulois even wrote that he was ‘the first, and only, pilot in history to learn to fly by mail.’ It became clear during the course of Foulois’s trials that the Army needed a better airplane. The Wright Model B replaced Signal Corps No. 1 in April 1911. After the Wright brothers restored No.1 to its original condition, the Army donated the aircraft to the Smithsonian Institution, where it remains at the National Air and Space Museum.

While there were many other developments in aviation technology during the rest of the “Pioneer Era of Aviation” (1903-1914), including the weaponization of aircraft, the Wright brothers’ success at Fort Myer was an indispensable part of those developments.