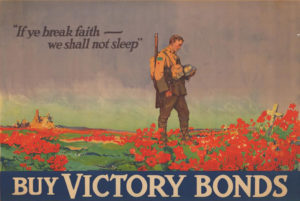 This May 25th is National Poppy Day, a day rich in meaning for veterans and service members across the United States. How did the poppy flower come to symbolize the sacrifices of veterans?

The widespread use of the poppy flower to commemorate veterans began in World War I. The American woman Moina Michael was inspired by the famous poem “In Flanders’ Fields,” written by the Canadian solider and physician Major John McCrae after burying his friend Lt. Alexis Helmer following the Battle of Ypres in Belgium. In his 1915 poem, McCrae described the poppies that “blow between the crosses, row on row,” a reference to the blood-red flowers that sprang up among the soldiers’ graves, a common sight along the Western Front. Moina wrote her own poem, “We Shall Keep the Faith,” based on McCrae’s, and dwelled on the poppy as a symbol of the sacrifice of the soldiers. She sold poppy flower corsages to raise money for veterans and their families. She vowed to wear a red poppy every day to promote remembrance of those who served in the war.

The poppy soon became a recognized symbol of the war and its human cost. Allied propaganda posters used the poppy to recruit soldiers and encourage people to buy war bonds. “If ye break faith… we shall not sleep,” a Canadian poster advertising victory bonds declared, quoting McCrae’s poem. The poppy was also used in ceremonies to remember the war dead. The Royal British Legion used the poppy in their Poppy Appeal, a massive fundraising effort to support families most affected by the war. The poppy is still worn, particularly in the on Remembrance Sunday, an annual day on November 11 to commemorate veterans’ service. A UK-based organization called 14-18 NOW is using poppies to commemorate the war through 2018. 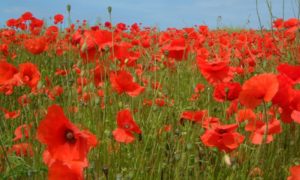 The United States also has a long tradition of using the poppy to raise funds for veterans’ organizations. The Veterans of Foreign Wars was the first veterans’ organization to organize a nationwide distribution of poppies when they led a distribution before Memorial Day in 1922.  The VFW later adopted the poppy as their official flower and called the poppies they distributed “Buddy Poppies” after the name of the factory in Pittsburgh where disabled veterans had assembled them. Veterans who are disabled and in need still assemble Buddy Poppies in VA hospitals. The American Legion adopted the poppy as its official flower in 1920, and began a poppy distribution program in 1924. Today, the American Legion still uses poppies at members’ funerals. At statewide gatherings, American Legion units create table centerpieces and corsages from poppy flowers.

Nationally, the U.S. World War One Centennial Commission and Veterans of Foreign Wars have developed the Poppy Program. Poppy kits containing 60 poppy seed packets are sold to raise awareness of the war and remember those who served. Individuals may purchase kits and resell the seed packets to raise money for an organization of their choice.

Here in Arlington, the American Legion Auxiliary Unit 139 distributes poppies every year to raise awareness of veterans’ needs and commemorate those who have served in the U.S. armed forces. On Veterans’ Day and Memorial Day Unit 139 representatives hand out poppy pins to those willing to wear them. On a typical Memorial Day weekend, volunteers distribute 1,000 – 2,000 poppies. Any individual who wishes to donate to the Unit can be assured that her or his donation will exclusively go to the American Legion’s veterans’ or military programs that assist service members. As usual, Unit 139 will distribute poppies this Memorial Day weekend at Fort Myer. Nancy Harting, a lifelong Arlingtonian who has volunteered with Unit 139’s poppy distribution program for years, says that often women will comment to distributors that they remember distributing poppies when they were children. Other Arlington American Legion units and the Veterans of Foreign Wars also keep the international symbol of the poppy alive through distributions and other events.

Next time you see a poppy consider how you can participate in its rich commemoration history.

In Flanders fields the poppies blow
Between the crosses, row on row,
That mark our place; and in the sky
The larks, still bravely singing, fly
Scarce heard amid the guns below.

We are the Dead. Short days ago
We lived, felt dawn, saw sunset glow,
Loved and were loved, and now we lie
In Flanders fields.

Take up our quarrel with the foe:
To you from failing hands we throw
The torch; be yours to hold it high.
If ye break faith with us who die
We shall not sleep, though poppies grow
In Flanders fields.

We Shall Keep the Faith
Moina Michael

Oh! you who sleep in Flanders Fields,
Sleep sweet – to rise anew!
We caught the torch you threw
And holding high, we keep the Faith
With All who died.

We cherish, too, the poppy red
That grows on fields where valor led;
It seems to signal to the skies
That blood of heroes never dies,
But lends a lustre to the red
Of the flower that blooms above the dead
In Flanders Fields.

And now the Torch and Poppy Red
We wear in honor of our dead.
Fear not that ye have died for naught;
We’ll teach the lesson that ye wrought
In Flanders Fields.

Mona Michael, “We Shall Keep the Faith,” Nov 1918, http://www.greatwar.co.uk/poems/moina-michael-we-shall-keep-faith.htm.