During World War I, Arlington County was called Alexandria County. Because the Alexandria Gazette, the local newspaper, reported on Liberty Loan activities in both Alexandria County and the City of Alexandria, this writing includes history from both places, and uses the word Alexandria to refer to both, unless clearly distinguished. 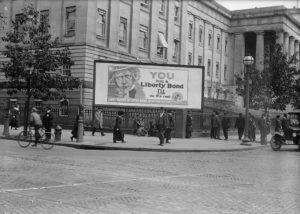 When the United States decided to enter the First World War in 1917, it had no way to finance the nation’s involvement in the conflict. The federal government, influenced by Secretary of the Treasury William Gibbs McAdoo, decided to raise the necessary funds for the war through increased taxes, and especially through borrowing from the population. The borrowing effort took the form of selling bonds, which McAdoo named “Liberty Bonds.” They were available for anyone to purchase in denominations of at least fifty dollars. They collected interest, initially at a rate of 3.5 percent, and could be cashed in at a local bank every six months. The Committee on Public Information was given the task to stage four major loan drives from May 1917 to September 1918. A fifth drive after the war’s end, called the “Victory Liberty Loan,” commenced on April 21, 1919. Each drive relied on carefully crafted marketing techniques pioneered by leading writers, artists, and psychologists. Through diverse mediums like posters, films, songs, and speeches, the Committee on Public Information appealed to a range of American values, including love of family, support for troops, respect for the office of the president, and confidence in democracy. When fighting ceased in 1918, 20 million individuals had bought Liberty Bonds and $17 billion had been raised – the equivalent of $6.3 trillion in today’s gross domestic product.[1]The spirit of the national loan drives was evident in Alexandria throughout the war. Alexandria held parades, hosted speakers, displayed its manufacturing prowess, and provided close news coverage to encourage citizens to purchase bonds. Liberty Loan drives mobilized Alexandrians to demonstrate support for the war through competition to purchase bonds.

Alexandria’s first Liberty Bond campaign took place from late May to mid-June of 1917. By the end of the first week of June, Alexandria banks and citizens had purchased more than $324,000 in bonds. Local bond committee leaders made sales pitches at movie theaters and sales companies asked their employees to spend a day selling bonds. 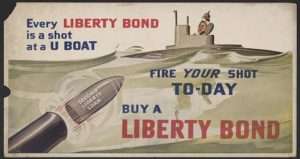 On October 24, 1917, Alexandria’s school children marched in a parade in the City to celebrate “bond day” during the second Liberty Loan drive. The Alexandria Gazette described it as “One of the most patriotic pageants ever witnessed in our city,” despite the cold and wet conditions.[2]

The Third Liberty Loan drive saw a well-coordinated effort in marketing. Three committees sent bond sellers to each of three “zones” in Alexandria Countyselling bonds door-to-door. From April 6 to May 4, 1918, Alexandria exceeded its bonds quota set by the Federal Reserve Bank. Stores that sold bonds sometimes kept “honor rolls” to encourage competition among purchasers. Committee members even ventured out of Alexandria to sell bonds to the workers constructing Camp Humphreys in Fairfax County. On April 26, a large audience assembled at the Richmond Theater in downtown Alexandria to celebrate “Liberty Day.” Senator Claude A. Swanson (for whom Swanson Junior High School was named) praised Alexandria for its contribution to the war industry with its shipbuilding and airplane plants. Liberty Bond salesmen then solicited the audience, while a parade including students, the Alexandria Fire Department, and the Red Cross Refreshment Corps, a women’s volunteer organization providing food and beverages to the troops, marched down King Street. An airplane made in the city dropped Liberty Bond literature as it flew over the crowd. Alexandria purchased more than $483,000 in Liberty Bonds during the third drive. While most of the bonds were purchased in the City of Alexandria, $71,600 in bonds came from the County – 251 percent above the County’s federal quota.[3] 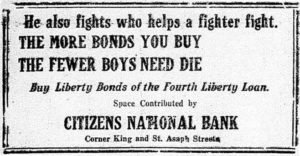 The Fourth Liberty Loan drive revealed Alexandria’s high hopes for its ability to contribute to the war effort. “That Alexandria is going over the top in a hurry there can be no doubt judging from the spontaneous sales that have already been made,” the Alexandria Gazette declared just two days after the drive began on September 28, 1918. There was a spirit of competition in the effort: “Alexandria is anxious to make a better showing than in the previous three campaigns,” the paper reminded readers, so everyone was urged to purchase at least one bond.[4] “Honor flags were awarded to any municipality that had been allotted a quota and reached it, and stars were affixed to honor flags whenever the municipality achieved more than fifty percent of its quota. “The local Liberty Loan Committee is working hard to secure for this city the honor flag,” the Gazette declared.[5] The campaign began in the City of Alexandria with another leaflet drop from an airplane, flown by W.L. Bonney of the Alexandria Aircraft Corporation. With the slogan “Over the Top,” the leaflets echoed the pleas of posters, salesmen and papers across the country. Readers were urged to make personal financial sacrifice for the good of themselves, their families, America and its allies – even “civilization” as a whole.[6] Women’s organizations and trade unions even organized their own committees with unique marketing campaigns. Despite Alexandria’s enthusiasm, the international Spanish influenza pandemic hampered efforts to sell the bonds.[7] Officials closed theaters and public places.[8] Towards the end of the loan drive, state officials reported nearly 62,000 cases of the Spanish flu in Virginia, with at least 250,000 suspected cases.[9] Nonetheless, Alexandria succeeded in going “Over the Top.” As the papers made a final push for citizens to “go at once to your bank and … help make the world safe for democracy,” the tallies came in.[10] The Fourth Liberty Loan had about 3,000 Alexandria subscribers – more than any previous loan. Alexandria City and County contributed approximately $750,000 in funds through this loan drive.[11] At the conclusion of the fourth drive, the Central Loan Committee praised Virginians who had sacrificed for the war effort, especially considering the challenges posed by the pandemic.[12]

The final push for war bond funding took place in the after the Armistice. The federal government initiated a fifth drive to help offset the unexpectedly high financial burden of the war. The Victory Loan drive lasted from April 21 to May 10, 1919 and generated $4.5 billion, the most successful campaign following the Fourth Liberty Loan’s nearly $7 billion in revenue.[13] On May 2, 1919, Alexandria’s Victory Loan Committee arranged for a six-ton tank to entertain an estimated 10,000 people at the Alexandria Canal Basin. “The tank with all the ease in the world climbed hills and finally ploughed its way through a deep marsh,” witnesses marveled. Bond sellers collected $20,000 in subscriptions after the tank driver delivered a patriotic address and encouraged people to purchase more bonds. [14] Again, Alexandria went “Over the Top” and purchased nearly $670,000 in bonds, more than $114,000 above its quota.[15]

In each of the five Liberty Loan drives, Alexandria exceeded the government’s expectations. At a time when purchasing a $50 bond was equivalent to two weeks of the average worker’s wages,[16] Alexandria certainly did its part to support the war effort.

[3] Alexandria Gazette, April 27, 1918; May 11, 1918; May 9, 1918. The Virginia Shipbuilding Corporation, founded at Jones Point in the City of Alexandria in early 1918, was beset with administrative and labor problems from the beginning. The first ship the company constructed, the Gunston Hall, did not sail until October 7, 1918, nearly at the end of the war. The company folded in 1921. See Lila Spitz, “‘More Tons, Less Huns’: The Virginia Shipbuilding Corporation in Alexandria, VA: 1917-1922,” Boundary Stones: WETAs Local History Blog, published Dec 23, 2016, https://blogs.weta.org/boundarystones/2016/12/23/more-tons-less-huns-virginia-shipbuilding-corporation-alexandria-va-1917-1922.  The Alexandria Aircraft Corporation was organized in the Spring of 1918. Washington Post, May 16, 1918.

[13] Eric Hilt and Wendy M. Rahn, “Turning Citizens into Investors: Promoting Savings with Liberty Bonds During World War I, The Russell Sage Foundation Journal of the Social Sciences, vol. 2, no. 6, (2016): 90-91.