On April 23, 2019, the County Board approved an update to the Master Transportation Plan (MTP) Bicycle Element and an amendment to the MTP Map depicting the Arlington Bike and Trail Network.

In April 2019 Arlington County completed an update to the Bicycle Element of its Master Transportation Plan. The County Manager appointed a working group of community members to assist County staff in outreach, draft plan review and other aspects of updating the plan.

The previous Master Transportation Plan Bicycle Element was adopted in July 2008.  While many of the goals and policies of the plan remain relevant, there have been significant changes in technologies, facilities and best practices that warranted a comprehensive update of the plan. The plan update incorporated input from people with a wide range of abilities and backgrounds from civic and business organizations.

Input from the public was accepted at various times throughout the plan’s development. Time for public comment was also incorporated into all working group meetings.

County staff and working group members have been out in the community gathering input since early 2017. Through the first two phases of community engagement, County staff were able to gather approximately 2,000 comments through online and in-person engagement activities. Community input influenced every aspect of the draft update, and involved a three-phase engagement process.

Engagement during phase one began during the summer/fall 2017 and focused on gathering input for the development of the plan’s overall goals and policies. Outreach included pop-up events at various locations across the County including Metrorail stations and farmers markets.

Between Aug. 19 and Sept. 22, 2017, a survey was posted online and was available at community events. More than 1,200 completed surveys were collected. View the survey responses

In addition to the multi-question survey, participants could express preferences for various forms of bicycle facilities by voting with dot stickers. More than 500 people participated in this exercise. Style board 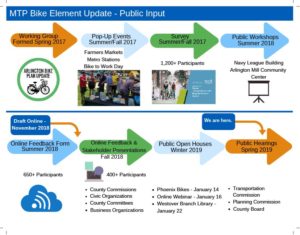 The second phase of community engagement began in the spring of 2018. Engagement activities focused on gathering community input as to where bicycle facilities are needed, what types of facilities are most desired and how to prioritize the planned bikeway network improvements. Staff and working group members were in the community at pop-ups at farmers markets and events like Bike to Work Day. Two public workshops were held in June 2018 at Arlington Mill Community Center and the Navy League Building.

Between May 24 and June 29, 2018, a second comment form was posted online and was available at community events. This form asked for feedback on where bicycle improvements are needed and what types of bike facilities residents want to see. Data analysis of feedback provided at the community events and online can be found below in the Working Group Meeting 12 materials.

Phase three community engagement process kicked off in fall 2018. During this phase, engagement activities focused efforts on gathering feedback on the draft Master Transportation Plan Bicycle Element Update. County staff have made presentations of the draft plan to the following stakeholders:

Through January 2019 County staff have been out in the community seeking input on the draft proposal. In addition to presenting to approximately 14 stakeholder groups and organizations, County staff organized two open houses – one on Jan. 22, 2019 at the Westover Branch Library and another held on Jan. 28, 2019 in partnership with Phoenix Bikes. The open houses were attended by approximately 120 residents. Additionally members of the community could also participate in an online feedback form which received input from over 650 respondents as well as an online webinar.

Having a working group made up of community members allowed staff to involve, and work directly with, the public throughout the process to ensure public concerns and aspirations were consistently understood, considered and reflected in the recommended plan update.

The working group generally met on a monthly basis for approximately 10-15 months.