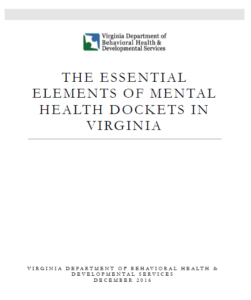 In October 2015, the Virginia Department of Behavioral Health and Developmental Services (DBHDS) was awarded a Justice and Mental Health Collaboration Grant from the Bureau of Justice Assistance. This three-year grant allowed DBHDS to convene a committee of experts to develop standards for mental health dockets that can be used throughout Virginia. This workgroup began meeting in February 2016 to review national standards and practices, as well as the programmatic and funding structures of existing dockets in Virginia.

In March of 2016, the Virginia General Assembly, in Item 313 (S) of the appropriations act, ordered the Department of Behavioral Health & Developmental Services “to develop a model program for mental health dockets to be used by courts in the Commonwealth to better handle the unique needs of individuals with mental illness.” As a result, DBHDS also began to partner with the Office of the Executive Secretary of the Supreme Court of Virginia, both in its own Mental Health Docket Workgroup, as well as on the Problem-Solving Docket Advisory Group convened by the Chief Justice of the Supreme Court of Virginia.

The final document — Essential Elements of Mental Health Dockets in Virginia — that has been produced as a result of these collaborations was published on December 1, 2016, and it is the hope of DBHDS that this report will be used by communities as they explore the creation of a mental health docket in their locality.

About the Behavioral Health Docket

Sign up to receive email updates on the Behavioral Health Docket.